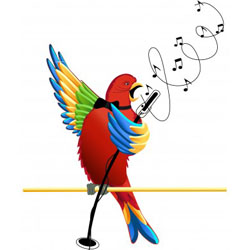 Music has a profound effect on our emotions as evidenced by its ability to transport us in time via our memories as well as to move us to tears or joyfulness. Depending on what we listen to, music can be calming and soothing or it can be energizing.

Music is a universal language understood by people from all cultures with the power to bring us together in a shared experience.

No one can tell for sure if animals perceive and experience music the same as humans do.

Researchers have started looking into the musical ability of animals.  Whales and certain bird species are two examples of animals noted to posses the ability to compose complex songs complete with pitch relationships, rhythms and patterns.

It is known that music has the ability to relieve stress and anxiety in animals.   Music is often used to calm dogs in kennels or those left alone at home.   Harp music has also been observed to lower the heart rates, anxiety and respiration in hospitalized dogs.

Moving rhythmically to a musical beat is common to every human culture.  Recently, interest has grown in determining whether beat perception and synchronization (e.g., dance) is a phenomenon that extends into the animal kingdom.    Of particular interest is the study done by Aniruddh Patel from the Neurosciences Institute of California.  After seeing the video of Snowball dancing to the Backstreet Boys he contacted Snowball's owner and made arrangements to have Snowball videotaped to his favorite music track played at different tempos (106 to 130 beats per minute).  Patel then analyzed the videos to determine whether Snowball's movements were just a matter of chance or if Snowball truly possessed the ability to synchronize his body movements to the rhythm of the music.   The results of the study clearly demonstrated that Snowball can dance.  Go Snowball!

So, what does all of this mean relative to our desire to enrich the lives of our pet birds?   We can begin by:

Just as music and dance add joy to our lives, the evidence is in that it enhances the lives of our pet birds as well.  So go ahead, pick up your bird and sing and dance as though no one else is watching.

A Parrot's Need for Mental Stimulation
In the wild, parrots...

The Amazing Bird Brain
In the old days,...

Tool Use in Parrots
Scientists often...