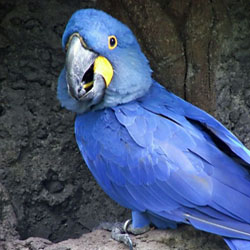 Regardless of the fact your baby parrot may have been born in captivity, parrots are still instinctually hardwired to survive in the wild. Unlike dogs and cats who have been selectively bred and domesticated over several millennia, parrots have only been bred domestically for a few generations and therefore they are not that different (physically or psychologically) from their wild counterparts.

Because parrots are driven by their instinctual needs they may behave in ways that sometimes makes life frustrating and difficult for both the bird and their caregivers.

Instinct is the innate disposition of an animal to perform a behavior in response to specific external stimuli. Instinctual behavior is an inherited mechanism that promotes the survival of an animal or species. Instincts are preprogrammed and the actions performed are not dependent on prior experience. The good news is that the more intelligent the animal, the more adaptable and flexible the behavior.

A parrot's above average intelligence makes it possible for these essentially "wild" animals to learn new behaviors and to adapt to our environment given the proper guidance, socialization and enrichments.

Difficulties most often arise in a parrot's household when it's human family doesn't understand what it's like to be an essentially wild being living in a domestic environment. Some bird owner's become frustrated when birds fail to adhere to our common rules of etiquette or practice the subtleties of living in a civilized society. For example:

Bird owners often make the mistake of interpreting their bird's actions as though they are little humans. Our birds don't see, logically interpret and understand the world the way we do. They aren't trying to be mean or inconsiderate in their actions and they don't have egos or hold grudges. They are just being birds and as such they have instinctual drives to:

Developing a deeper understanding of what drives your bird's behavior will help you to successfully navigate or mitigate many of the negative behaviors as well as to enhance the positive ones. Trying to look at the world through your parrot's eyes rather than expecting them to adapt to the human perspective will help to foster a deeper bond, one based on mutual trust.

To learn more about how to address your parrot's key instinctual needs, check out our related articles.

Why Foraging is Important
Parrots spend up to...