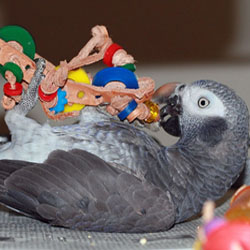 In the old days, parrots were just thought to be skillful mimics and where not given credit for the ability to learn and understand our language.    To add further insult, the term Bird Brain was often used as a derogatory term towards individuals with, let's say, diminished brain capacity.

Birds do have a much smaller cerebral cortex, which is the main area of intelligence for most animals.   However, it is now known that they use an entirely different part of their brain, the hyperstriatum, as their intelligence center.

Modern research has shown that parrots have an amazing brain and they are capable of much more than mere mimicry when it comes to language.   Parrots also have been recognized for their memory of places and individuals as well as their ability to think, reason, solve problems,  count, grasp abstract concepts, learn from example and to use and fashion tools.

To view some amazing segments about Alex check out these videos:

Studies continue to demonstrate that parrots have a higher level of intelligence than they have been given credit for.   Most notably, Dr. Irene Pepperberg's work with African Grey parrots has revealed that parrots have the ability to:

So, the next time someone calls you a Bird Brain, say "thanks for the compliment" !

A Parrot's Need for Mental Stimulation
In the wild, parrots...

Music, Dance and the Avian Brain
Music has a profound...

Tool Use in Parrots
Scientists often...

Teaching Your Bird to Talk the Alex Way
Birds learn to talk...