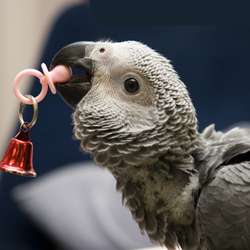 One of the most important things a parrot can learn is to play. Depending on their environment and personality, some parrots seem born to play with any and every toy. Other parrots take a little more convincing. Fortunately, with a little thought and a lot of positive reinforcement, you can mold your favorite bird into a parrot toy-aholic. Playing isn't just fun though, it is an important component to avoiding undesirable behavior such as screaming and feather destructive behavior.

In my home the most important thing a parrot can learn is how to use their "indoor voice." I work all day in my home office, talk to clients on the phone, transcribe interviews and try to focus on figuring out the perfect word to use. This kind of work requires not silence, but definitely a lack of repetitious ear-drum busting noises. I simply can't work with screaming parrots in the house. All three of my African parrots certainly vocalize all day, but on the other end of the phone people, say, "You have parrots, really? Why can't I hear them?" I've made a concerted effort to teach my parrots that they can get what they want (me to interact with them) without screaming. So they don't. I've also made sure that they have plenty of ways to keep themselves busy with enrichment. It's not impossible, but it is difficult to scream and chew at the same time.

Let's define this though. All parrots vocalize. Some parrots normal vocalizations have a much higher decibel level than others. This isn't "screaming." In the way most of us define it, screaming is not a normal behavior. Screaming is learned. Screaming is an extremely loud, repetitious noise that goes on and on and on. I'm guessing this isn't comfortable for any parrot. As Dr. Susan Freidman once said to me, "Imagine screaming at the top of your lungs for a half an hour in order to get what you want." Yikes!

TAO – A MINI MACAW WITH A NOT SO MINI VOICE

I was reminded of the importance of play to circumvent undesirable behavior when a new parrot recently joined my flock. I foster occasionally for Parrot's First, a rescue in Los Angeles and found myself bringing home a yellow-collared macaw named Tao. Not surprisingly this rescue mini-macaw can be loud. I didn't mind the little guy letting off a little steam now and then, but I had to make sure it didn't become a learned behavior.

Not reinforcing any screaming behavior was of course, my responsibility, but I also needed to make sure that he had more interesting things to do. I believe that parrots often scream as a means to control their environment. In other words, they're bored! Big problem with this little guy because he hadn't played with a single toy I have given him! Believe it or not, he had to learn to play. Quite possibly it is the most important thing he would learn while he lived with me. Playing was crucial for his mental and physical well-being.

So what had I tried to introduce to him? I tried chewable wood toys, plastic chains, dispensing toys, shredding toys. No interest. It was time to get proactive. I needed to find some inventive ways to create interactive toys and train him that investigating let to rewards.

If you have a bird that is not playing, chances are that she is nervous around new toys. She will need to be desensitized or your chances of convincing her to play are minimal. Systematic desensitization involves gradually exposing your parrot to the object in question without arousing fear responses. This will allow a parrot to determine that the object in non-threatening. If you notice that your parrot reacting to something fearfully by thrashing, trying to flee, flapping her wings, leaning away, and/or growing, then back off. Place the offending object where the parrot can see it, but far enough away that she isn't reacting to it. Gradually move it closer, watching the parrot for avoidance behavior. Try interacting with the object yourself, so that our parrot can see it's non-threatening to you. Go slow, and be thoughtful. If you were afraid of spiders, you wouldn't want someone to throw one on you. Respect your parrot's fear as legitimate.

It is never a good idea to take the attitude of, "Oh, she'll just get over it." If you force your parrot to deal with objects she reacts to as frightening, she may get over it eventually, but she may also start to react to everything new as something that will be forced on her. For example, if you can't swim and your best friend pushes you into a pool, you may learn to swim and even get over your fear of water, but you probably aren't going to trust your best friend as much. Being associated with aversive experiences could quite easily ruin your relationship with your feathered best friend.

I had recently finished up a carton of eggs and after checking that there had been no egg leaks on the carton, I cut it up for a little parrot fun. My own guys are familiar with this toy so it went directly in their cages, but Tao is afraid of everything and had to be desensitized first. After I was certain he was confident with the odd blue contraption, I filled it with treats and zip-tied it to the cage.

This little guy didn't know yet that there is much to be gained by investigating new things in his cage. He wasn't too sure he wanted anything to do with the egg carton. A couple of molluca nuts on the top of it gave him reason to investigate and reward himself. I had discovered in his first few days with me that white-striped sunflower seeds, molluca nuts and almonds were great motivators for Tao. Nutriberries, healthy people food, vegetables and fruit were of no interest to him. It is possible though, that when he learns to investigate new things he may have more interest in investigating these "strange" foods. Another great reason to train Tao to play.

Despite the rewards on top of the egg carton, he wasn't too sure about ripping it up to get to the goodies inside. So I kept putting nuts on the top now and then throughout the day, in different places, shoved in the holes so he could pry them out, etc. Every time he investigated and got a little more adventuresome with his new toy he would get a reward.

Over two days he went from cautiously grabbing a nut from the edge of the egg carton, to reaching across it to grab one, to prying an almond out of a crevice, to finally beautiful destruction. I got up an hour after dawn on the third day and the egg carton was destroyed, its innards plundered. The next egg carton I gave him was annihilated in a matter of hours.

WHERE DO WE GO FROM HERE?

The egg carton was a means of teaching Tao to investigate. Now I can try giving him boxes loaded with treats, paper bags, treat dispensing toys and anything else that will continue to encourage this behavior. If I can catch him investigating other new toys that don't dispense treats, I can be the treat dispenser instead. If I see him chewing on the new wood block toy I can call out "good" to mark the event and bring a treat. It's going to take some time still, but at least we are on our way!

Egg cartons can now be a part of his enrichment rotation, but it is important to understand that there MUST be a rotation. A recent article in the journal Applied Animal Behavior Science authored by Rebecca A. Fox put science to me and my colleague's assertion that change is critical to molding well-adjusted parrots. The results of their study at UC Davis with orange-winged Amazons demonstrated that the rotation of enrichment objects was much more successful in reducing fearful behavior than simply providing enrichment objects. Fox also noted that the types of toys and individual preference must also be considered for success. So teach your parrot to play, assess her playing preferences, offer variety and change it up frequently. You will both have tons of fun!

****************
Rebecca K. O'Connor has been training birds for over a decade. She has worked and consulted at free flight bird shows in Mexico, Australia, Ohio, Florida, Texas, and California. Believing in empowering parrots and their human friends, she is a frequent contributor to Good Bird Magazine and her book, A Parrot for Life! Was released in February 2007 from TFH Publications. She consults with parrot owners helping them to problem solve and enjoy an enhanced and meaningful life with the birds in their home. Lectures and workshops are also an important aspect of the work that she does. She is a falconer, constantly working with her own birds, occasional foster parrots and lives with three African parrots, a flock of homing pigeons and a Brittany spaniel. Read more about Rebecca at: www.rebeccakoconnor.com and be sure to check out her blog Heckled by Parrots (Examining, Surviving and Loving Life with Parrots)

Games to Play with Your Bird
Parrots love to play...

How to Get Your Perch Potato to Exercise
Playing games ...

The Importance of Play
In order to ward off...

Why Birds Play
In the wild, much of...