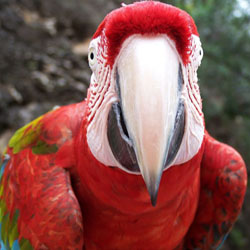 Parrots rarely bite in the wild and when they do, it is usually for defensive reasons.  A parrot's first instinct is to flee confrontation except when it comes to territorial issues related to guarding a nest.  Aggression in the wild is often expressed through body language and loud vocalizations.
Parrot bites are undoubtedly emotionally and physically painful to humans.  As hard as it is for us, we just shouldn't take it personally.   Armed with the power of observation and knowledge of a bird's body language, most bites can be avoided. If we are bitten, it is usually our own fault for being insensitive to their signals or for failing to control their environment.

Biting is essentially a learned behavior that a bird uses to avoid doing something they don't want to do or to get something they want.   It often arises out of frustration over the fact we fail to recognize and respect the other clues they provide us as to their mental and emotional state.

How to avoid getting bitten:

If you are bitten:

Bird Bites - Don't Blame the Bird!
An all too common...

Do Parrots Have Emotions?
Scientists have long...

The Seven "Hormonal Parrot" Dwarfs
Once upon a time, in...

Why Does My Bird Scream?
Vocalizations ...