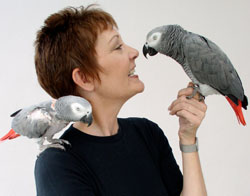 Patricia Sund is a Columnist for "Bird Talk" Magazine and has a popular Blog called "Parrot Nation," where she writes about life, birds, and her adventures in the world of Aviculture, including volunteering as a Keeper at the Cincinnati Zoo. She has written for Phoenix Landing's "Phoenix Beakin'", "The Alamo Exhibition Bird Club," the AFA "Watch Bird,"as well as for the Rocky Mountain Society of Aviculture. She has written internally for American Airlines as well as having written, directed and produced a play called: "Loves People-Loves to Travel."

When asked why she has parrots in her life, she always responds the same way: "I've been a Flight Attendant for almost 23 years; I guess I'm used to serving food, repeating myself, cleaning up crap and getting hollered at."

I Don't Believe in Starter Birds
What is a “starter...

Just One of Those Days
I just didn't feel...

What's the Point?
Having a parrot in...